Follow Nature Notes correspondent Jono Forgham's walk through the Ash Valley in Hertfordshire and spot birds, butterflies, bees and lots of other insects

Striding out on a different day for his Nature Notes wander pays off for Jono Forgham as he spots birds, butterflies, bees and plenty of other insects exploring the Ash Valley in the sunshine...

I usually do my Nature Notes wander on the Monday of the week before publication, but a look at the weather forecast over the weekend informed me that Tuesday would be a far better day. Glad I changed my mind as Monday was cold and windy, Tuesday sunny, warm and still. Perfect day to be out and about.

I set off from home, walking up Chapel Lane and then on to Ash Valley Golf Course, deserted apart from the green keepers going about their work as usual. A fox ran out from a hedge with a rabbit in its jaws, gone before I could even reach for my camera. However, soon afterwards a superbly plumaged male yellowhammer burst into song from an open branch. I fired off several shots and moved a little closer, using the overgrown hedge as cover. Eventually I was able to get some relatively close shots. Fantastic colours!

I arrived at the footpath that takes a route over the golf course. The obligatory red kite and common buzzard circled overhead whilst crows and rooks probed the neatly mowed fairways for insects and leatherjackets. Upon checking some long grass, I disturbed a small heath butterfly that I followed until I managed a reasonable photo. Blackcaps and whitethroat warbled from the willows and hawthorns.

After crossing the lane, the path heads down to the clubhouse. On the 18th tee was a stand of meadow cranesbill and upon the broad, slightly hairy leaves a small black hoverfly, Platycheirus albimanus. Down the 18th fairway and a chiffchaff "zip zapped" his monotonous and repetitive call and a kestrel headed over the small copse by the 18th green.

The path continued around to the road between Little and Much Hadham and on a corner by a cherry orchard was a good stand of lilac bushes, in full bloom. I stood by some particularly scented flowers and didn't have to wait long until an early bumble bee (Bombus pratorum) and white-tailed bumble bee (Bombus lucorum) came along to collect nectar.

Having wandered a few 100 yards along the lane I picked up the footpath adjacent to Lordship Farm House. Honeysuckle was just coming into bloom as was, all along the path to the bridge over the River Ash, common comphrey. Plenty more insect activity here, but I knew where it was going to be most productive.

Over the bridge and a left-hand turn brings the wanderer on to The Gallops. Here there has been a huge patch of common nettles and white dead nettle for many years, perfect habitat for many insects. I put down my rucksack, large-lensed camera and binoculars and searched the vegetation for insects, hoping to get a few macro shots of some. I was not disappointed and after 45 minutes had over 150 photos to sift through upon my return.

Most obvious were the ladybirds, sitting on top of nettle leaves in the sun. Both seven-spot and 14-spot here, the latter being a tiny yellow and black beetle, easily half the size of the common seven-spot variety. A dark bush cricket nymph hopped over the leaves just as I caught sight of one of my target species: scorpion fly. This was a female with just a red tip to the end of the abdomen. The male shows a fierce looking, yet harmless, sting-type appendage that curls up giving this colourful fly its name. Plenty more bees here, too, with a new species for the walk, a small black bee with grey hair: ashy mining-bee (Andrena cineraria).

I could have stayed here for the day, such was the amount of insect life but there were other habitats I wanted to check whilst it was still warm and sunny. A red and black froghopper lurked on a leaf as I crossed another bridge into a field that hasn't been farmed for many years. Consequently, it is full of flowers: teasels, buttercups, daisies and, later in the year, knapweeds. Always a good site for butterflies. Firstly, a male orange tip sailed by, then, in quick succession, large white and green-veined white before I noted my second target species for the walk: small copper butterfly. Not a particularly common species in East Herts so good to see three on the wing at the same time. One kindly posed on the ground for a photo before thinking it could improve on that and generously alighted on a buttercup.

Over a stile and through two sheep fields, where I added a second hoverfly species to the walk, a colourful Myathropa florea which was feeding on hawthorn blossom. This hoverfly is one of the easier yellow and black ones to identify as it has a Batman-like logo on the thorax. The path here emerges back on to the lane by a farm and there follows a slightly risky walk along the road for a few hundred yards. Fortunately, today there was little traffic and I managed to get to watch a green woodpecker feeding upon an anthill before picking up the footpath opposite South Cottages and crossing the Ash again. A stand of wild marjoram grows along the banks here, but not yet in flower. When it does it attracts large numbers of butterflies, particularly skippers, so I shall be checking on it in July. Also here is a stand of horseradish growing wild, its large, vibrant green leaves just poking up taller than the nearby grasses.

Pleased with what I found I headed home to process the numerous photographs and make some quick notes before lunch. A really productive wander and, now that travel restrictions have been lifted, I plan to move away from Little Hadham for my next walk in a fortnight where I hope to record better butterfly numbers and species.

Whilst at home I continue to run my moth trap nightly, but the overnight temperatures have been very poor for mothing, apart from the previous Friday and Saturday night where I took several new species for the year, including the imposing lime hawkmoth. I have also continued to monitor all wildlife in the garden on a daily basis, beating the shrubs and trees to see what falls out as well as sweep net the ivy and hawthorn hedge that runs alongside the chapel graveyard at the bottom of the garden.

I find many new species each day, with the total now in excess of 260. Of this, 49 are birds whilst another 56 are moths. The rarest thing so far has been a small bug, Stictopleurus albutilon, that has extended its range over the south east in the last five years. A first sighting for me.

Also, I have spent time watching the mason bees inspecting the drilled holes in the brickwork from a long since removed piece of trellis. Most pleasing to watch was the hairy-footed flower bee (Anthophora plumipes) checking out one particular hole. Once inside she excavated a small amount of mortar before shovelling it out with her back feet. She then flew out, reversed in and presumably laid an egg. Following this she flew off, to return with some pollen that will be placed next to the egg for the hatched larva to feed upon. Great to watch this very clever process.

Hopefully, the temperatures will soon pick up during the night and I shall be counting good numbers of moth species before my next article. A full record of everything I have encountered in the garden can be found at https://littlehadhambirding.blogspot.co.uk and search for garden self-isolation list.

Finally, thanks to readers who have contacted me regarding identification issues. I was sent a photo of a large bird of prey that may have been the white-tailed sea eagle that was recording over Sawbridgeworth and Stortford on May 9. This will undoubtedly have been one of the recently released birds from the Isle of Wight. You can't mistake them, they are seriously huge with a wingspan of over 2.2 metres, compared to our regular buzzards that have a wingspan of 1.1 metres!! 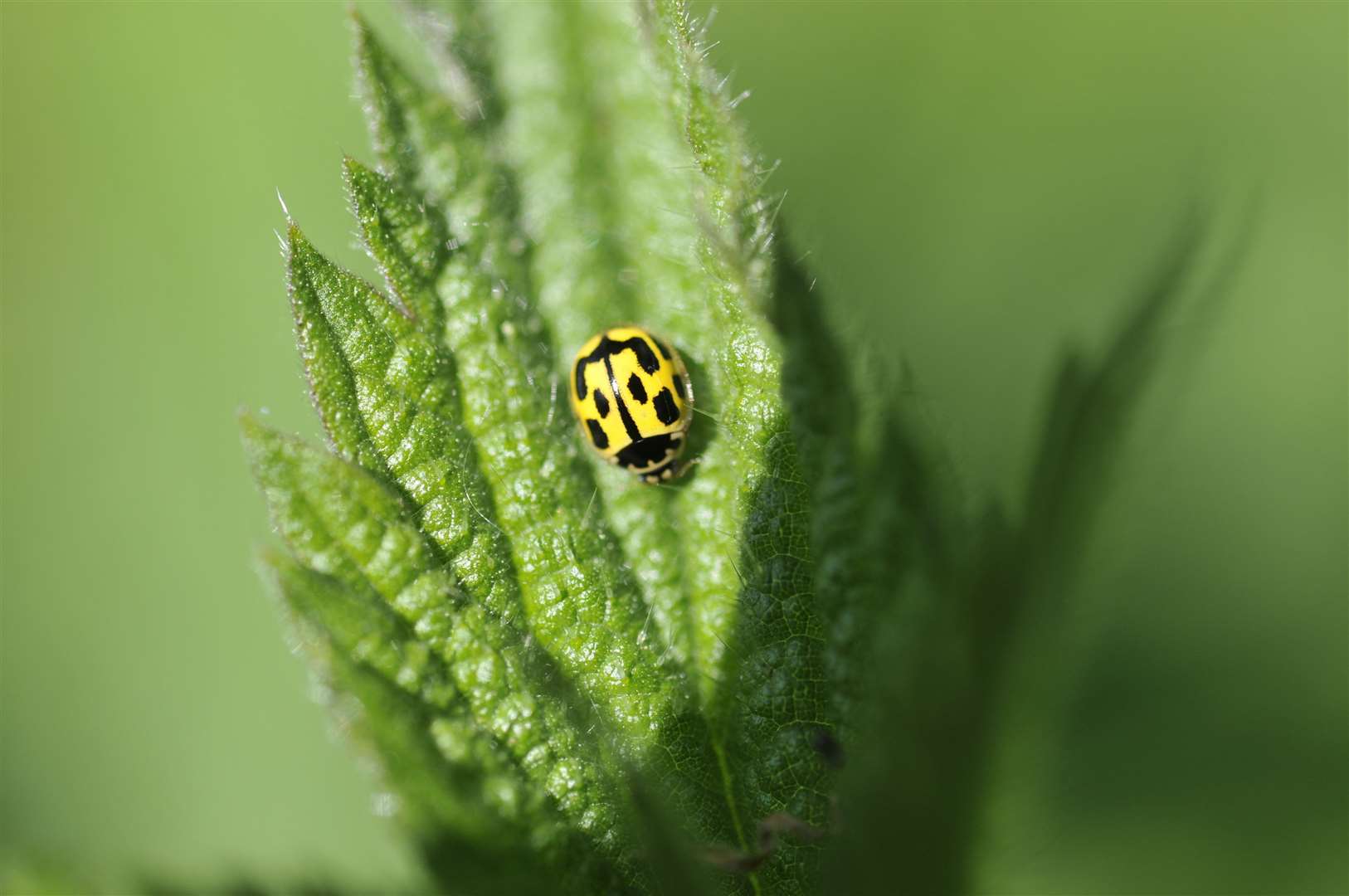