By Hollie Ryder
-
hollie.ryder@bishopsstortfordindependent.co.uk
Published: 09:51, 19 May 2020

A Much Hadham mum marked her 15th wedding anniversary by letting her husband and children shave off her hair – having just started chemotherapy treatment for breast cancer.

Caroline Daniell, 42, a teaching assistant and French teacher at the village's St Andrew's C of E Primary, was diagnosed in January.

She wanted to turn the trauma of hair loss into a positive experience for her family. So, with husband Dave, daughter Eloise, 11, and son Freddie, 9, she launched a £1,000 fundraising appeal for the Helen Rollason Cancer Charity – and has raised more than £5,510.

On Thursday (May 14) the family recorded Caroline's head shave at their home in Malting Lane, with photos and video footage. Her trimmed locks will be sent to the Little Princess Trust, which creates wigs for children and young people from donated real hair.

Caroline said: "I've heard that it's quite hard to watch your hair fall out as a result of chemotherapy and that it's a traumatic experience, so I wanted to turn it around and try to make it a fun experience for the kids and to get them involved.

"I told them they could cut my hair, which they were so excited about. They keep on checking the justgiving page for donations, although their expectations are a bit high thanks to Captain Tom!"

Eloise said afterwards: "“I thought Mummy’s nose would look massive with the new haircut, but it doesn’t! If it were me, I’d find it all really traumatic, but actually it was a great experience”.

Caroline added: "The whole thing took an hour. We recorded it. And played loud music and the kids danced around the kitchen, taking it in turns to cut the plaits and then shave my head to a grade 4. Our Labrador Molly slept through the whole thing and I’m sure she’s now looking at me funny!

"I’m so overwhelmed by all the messages of love and support I have received, and grateful to all those who have donated to the Helen Rollason Cancer Charity. We even received an email from the CEO of the HRCC to wish us a happy anniversary!"

And she said Freddie approved of her haircut. "He ruffled my hair, gave me a kiss and said, "Mummy, you rock the new hair".

Caroline's treatment started on May 5 and she was warned to expect hair loss before the second treatment three weeks later.

"Because hair loss starts within a couple of weeks, I wanted to be able to cut it for the Little Princess Trust. A couple of Eloise's school friends have donated their hair to the trust, so she's very aware of the charity. I set a date and then thought 'Oh, that's our wedding anniversary!'"

Caroline, who also coaches juniors at Much Hadham Tennis Club, said her family had been with her "in every way" through natural breast reconstruction surgery, which she underwent at Chelmsford's Broomfield Hospital in March, and the ongoing chemo, which is due to finish in mid-August after six cycles.

She praised the level of care and support she has received from health professionals. "I cannot fault it," she said. "From my GP, who I went to see the day after I found a lump, to the Williams Day Unit at Princess Alexandra Hospital [in Harlow], everyone's been wonderful."

On her justgiving page, she added: "Under the fabulous care of the NHS and my breast care team, I was lucky enough to have immediate breast reconstruction in March. Only six days after my surgery, all reconstructions were being cancelled in preparation for the impact of Covid-19.

"My superhero of a husband, Dave, my family and friends have been so incredibly and wholeheartedly supportive to me throughout this whole process. My children especially have given me the strength, resilience and good humour to deal with this head on."

Caroline chose Helen Rollason Cancer Charity because it was a smaller, local cause that would probably be harder hit by the effects of the pandemic. "Also, they focus on your emotional well-being, which was so important to me," she said. "I registered with them before my operation, and they offer counselling and well-being treatments. I'm 43 in June and Helen Rollason was just 43 when she died." 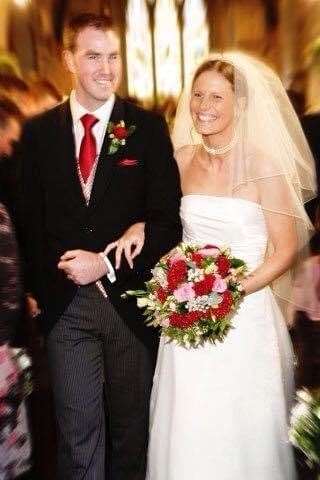 Following her first chemo session, Caroline said the first 24 hours were "horrendous" and then she felt like she had "the mother of all hangovers!"

Se added: "I've been overwhelmed by everyone's lovely messages of support. My spirits are up, it's not a sad time – everyone is making it a lot more bearable.

"My children are incredible. They can see what I need. They're helping around the house, hoovering and tidying up... they're going to have to keep this up even when I'm better."

Caroline said she had decided not to wear a wig as she was enjoying her new 'pixie' look.

To donate to Caroline's Buzz Cut for Cancer visit www.justgiving.com/fundraising/caroline-daniell.