Fire breaks out at Fish'n'Chick'n on Thorley Park in Bishop's Stortford

Firefighters tackled a blaze at the fish and chip shop at the Thorley Neighbourhood Centre in Bishop's Stortford on Thursday evening (June 25).

The fire broke out at Fish'n'Chick'n, which is the family-owned fish and chip shop chain's flagship outlet.

The blaze broke out soon after 7.30pm and was extinguished within about an hour by four Hertfordshire Fire and Rescue Service crews, including both fire engines from Bishop's Stortford and one from Hertford. Firefighters carried out checks to ensure the safety of the building.

Pictures showed black smoke billowing from the roof. There are no reports of anyone being injured.

James Lipscombe, managing director of the 97-year-old business, said: "Everyone is safe, which is the main thing. I am here now with the team. The damage has been contained to the shop. I will head in there when I can to survey the damage."

Fish'n'Chick'n is the largest privately owned chain of fish and chip shops in the country, with 21 branches in five counties: 13 in Essex, including Harlow, three each in Hertfordshire and Cambridgeshire plus one in Milton Keynes, Bucks, and one in Basingstoke, Hampshire. Its head office is Chesterford House at the Stansted Distribution Centre at Start Hill. 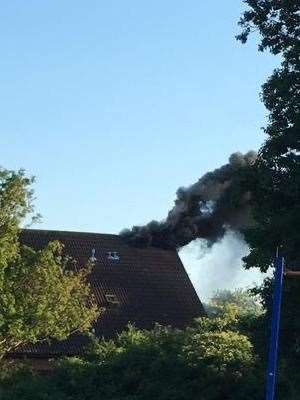