A pom pom from a pair of Addie Brady’s favourite shoes was pinned to her mother Michelle’s running vest, next to her heart, when she ran the London Marathon in memory of her 16-year-old daughter.

Michelle Brady drew strength from this lucky charm throughout the day. “I felt like she was with me and helped to carry me around,” she said. “Whenever I had a hard moment, I squeezed the pom pom.”

Addie, a Herts and Essex High School student, died in February 2018 from a brain tumour.

She battled cancer twice in her short life. She was diagnosed with spindle cell sarcoma, a soft-tissue tumour in 2011, when she was a nine-year-old pupil at All Saints Primary School.

After she endured surgery and chemotherapy, her family – Michelle, dad Tara and older sister Skylar – believed the disease had gone.

But in 2016, after she was rushed to hospital following a seizure, doctors discovered that she had an inoperable brain tumour.

“She was so courageous and showed such bravery,” Michelle said. “She never wanted to let it bring her down. I feel like I’ve adopted her attitude. That’s what she would have wanted.”

Michelle finished in 4.49.17 for the Addie Brady Foundation – a cause that she and her family set up – which works with with the Brain Tumour Charity. So far, she has raised £5,091 including Gift Aid, smashing her original target of £2,700.

“For me it was about running for Addie and keeping her memory alive, but if I can raise money for other families going through what Addie experienced then that can only be a good thing,” she said.

It was Michelle’s second London Marathon after first running it in 2016. “Addie was very much a part of the build-up to that event,” she said. “She was there on the sides, cheering me on.”

This year, Michelle knew it would be difficult without Addie there, but she received tremendous backing from supporters on the route – every couple of miles after the halfway point, she was met with a cheer and a friendly face. “They really helped drive me forward,” said Michelle. 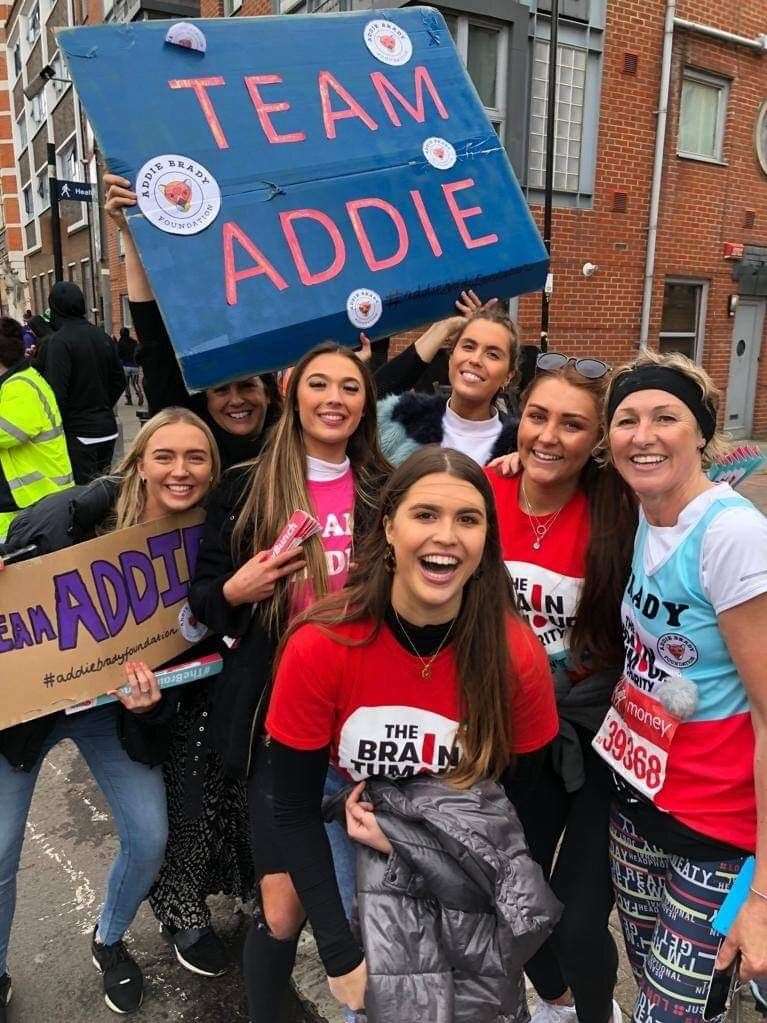 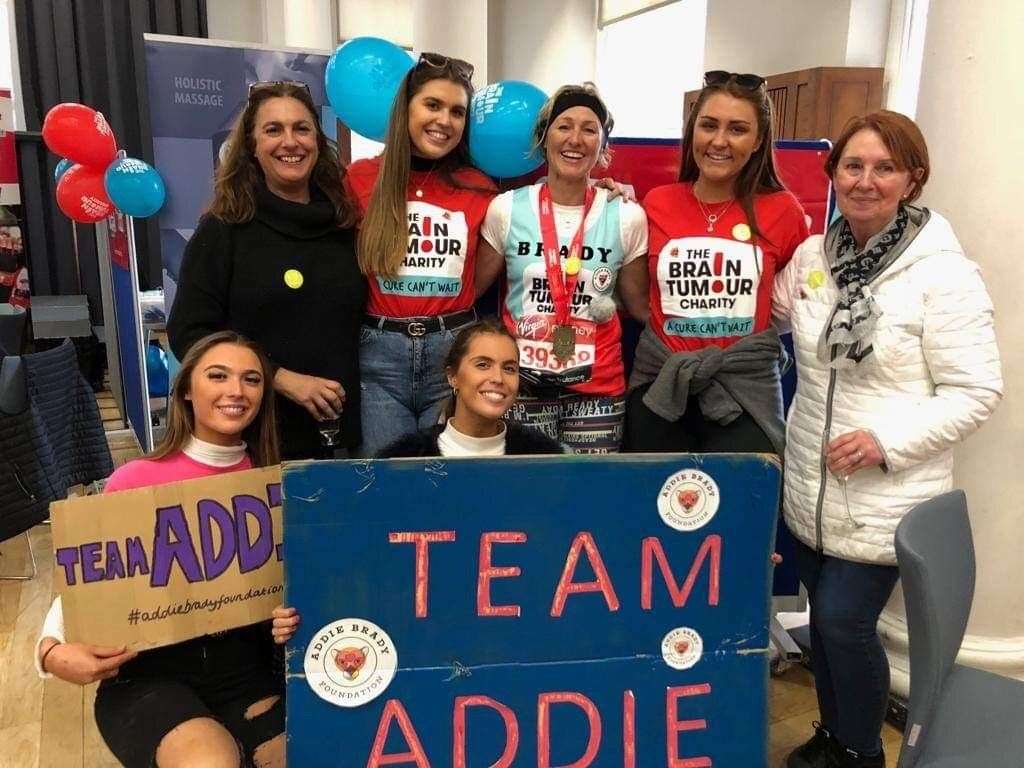 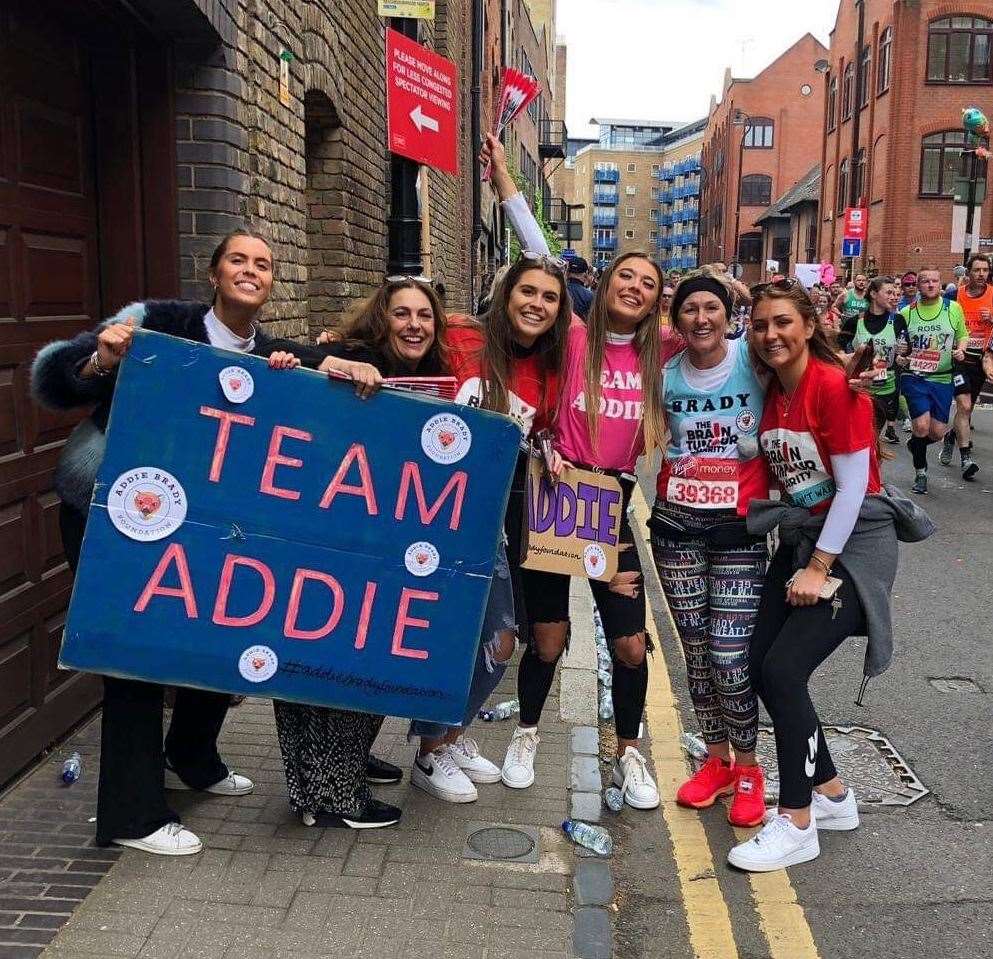 Michelle was given a little boost at the start by Indie editor Paul Winspear, who ran in memory of Stortford schoolgirl Edie Wilson, who died from a rare form of brain cancer last May, aged 12.

Paul finished in 5.23.43 and has raised more than £7,000 for Edie’s Butterfly Appeal, a charity set up in 2014 by the Wilson family to fund research into ependymoma, the tumour that claimed Edie’s life.

Herts & Essex High School teachers Caitlin Hayward, Thomas Marlow and Ian Corner ran to raise funds for CLIC Sargent, a cause close to Addie’s heart, as she worked closely with the charity during and after her first fight with cancer.

Michelle said: “It really added to the day to know I wasn’t running alone. I think it shows how many people she touched in her short time of being here.”

Skylar, Addie’s older sister, was among the supporters on Sunday. The next day, she told her parents she plans to run the marathon in 2020 for her little sister. The Loughborough University student has already applied for a ballot place.