As reported in my last column, we are self-isolating at home so I have taken this as an opportunity to really study my garden wildlife in detail and record all that I find. By last Monday I had discovered over 100 species, mainly birds and insects but a few other surprises too.

Most unlikely to be found was a smooth newt coming out of hibernation from an old pile of house bricks, a wonderful find, as was watching a common shrew trundle across our rockery before disappearing down a gap in between two granite stones. Both were the first time these had been recorded here.

A close study of the insects produced a series of hard-to-identify hoverfly and bee species, but with patience and a steady hand, photos were managed and identification was possible. The splendidly-named chocolate mining bee was regular as was the equally frequently seen orange-tailed mining bee. The hoverflies were even more demanding for identification but Eristalis pertinax, Epistrophe eligans and Meliscaeva auricollis were all discovered. However, probably of more interest to the general naturalist was the emergence of the butterfly species that we associate with mid April/early May.

The weather over the Easter weekend was absolutely perfect for insect watching, in particular the butterflies. The small tortoiseshell was fairly common. Pleased to see this, as about a decade ago its numbers began to crash due to a variety of reasons but, happily, it seems to be making a comeback. Equally common was the stunning sulphur yellow brimstone. This will be the male which emerges first and then is followed a fortnight or so later by the pale green female. A butterfly that is unmistakable at this time of year as there are no other yellow or green ones on the wing.

Another eye-catching butterfly is the peacock, with its fine array of colours and its 'eye spots'. Several butterflies and moths have these on their wings. They use them to ward off predators by flapping their wings, thereby making it look like a large creature is looking and blinking at them. It must be a successful ploy as the peacock is one of our most common butterflies throughout the warmer months. Another easy-to-spot butterfly is the orange tip. The male, predominantly white, has bright orange corners to its wings whilst the harder-to-identify female is just a plain white creature with a few black blotches.

The final one that may be in readers' gardens at present is the orange comma. This is so named as on the underside of the wing it shows a white crescent shape, reminiscent of the punctuation mark. It shows particularly ragged wing edges to make it look more like a leaf when it is at rest. Finally, one to look out for as it will soon be on the wing is the meadow brown, an orange/brown insect with a small yellow eye spot near the top corner of the forewing. These are certainly one of the most common of UK butterflies and will be seen on any meadow and woodland walk.

To illustrate these butterflies I have once again called on the Stortford Nature Facebook community with a plea for high-resolution photos. As with my last piece, locals were very happy to send in their work so a special thanks to those who did. Their photos are credited accordingly.

As usual, I ran my garden moth trap each night, checking it early in the morning, recording the moth species and releasing them unharmed. This trap attracts the insects to the bright light (125 mercury vapour bulb) and they then roost overnight in the box below the bulb. So far this year I have trapped 30 species.

However, there are moths that fly during the day and so they are not attracted to the bright light. To catch these species you either have to go searching in hedgerows that contain the correct plants and shrubs for the caterpillars to feed upon or use a newer and less time consuming technique. This involves the use of pheromones. A small capsule is soaked in a specific pheromone that is a replication of the actual chemicals the female moth emits to attract its mate. This can be placed outside in a garden on a warm and slightly breezy day to see if there are any male moths of a specific species hanging around locally. One particular moth for which this method has a proven track record is the stunning emperor moth, a hugely colourful insect showing, like the peacock butterfly, superb eyespots that it uses to defend itself. Within an hour of placing the pheromone trap in the garden I had netted and photographed three individuals, proving that they are indeed a common species, just rarely seen.

Whilst browsing through the Stortford Nature pages, I came across some absolutely stunning artwork by local artist Tracey Pinnington. She had uploaded two images, one of a seven-spot ladybird and the other depicting a queen bumble bee, Bombus terrestris, the buff-tailed bumble bee. I contacted her asking if I could use one or both of the pieces of work in this article and she graciously accepted my request. Both are shown here, showing the stunning eye for detail. Tracey tells me that she is a full-time artist and a member of the Spectrum Noir's artistic design team. Spectrum Noir are affordable yet high quality art suppliers, and for these two images she used different markers and pencils. For the ladybird she used Spctrum Noir illustrator markers while for the bumble bee she used their ColourBlend pencils. The results speak for themselves.

I spend a lot of time looking through a wide variety of field guides to aid identification of insects etc. and usually the artist that authors turn to is the skilled Richard Lewington. However, I feel these images are as good as his in the amount of detail shown, especially the intricate markings on the bee picture. Thank you to Tracey for permitting these to be shared here. If you wish to view further examples of her outstanding work please do go to her website at www.tracey606.wixsite.com/tpinningtonart.

Back on my regular garden safari I have been pleased to note much bird activity. We have a pair of goldfinches nest building in a tall shrub, a pair of dunnocks now sitting on eggs in the hedgerow and, out the front of the house, a pair of wood pigeons are constructing a particularly messy and precarious nest in a silver birch. Be interesting to see if they complete this pile of twigs or abandon it for somewhere a little more secure.

My first blackcap was singing outside my office in the garden this morning, the 39th bird species I have seen or heard from the garden in the last three weeks. Several more species will make the list in the next fortnight. A view over the Ash Valley to the steep hill opposite the local pub gives regular views of rabbits, muntjac and an occasional fox. Basically, the more you look the more you find.

As always, if anybody has an interest in finding out what a particular creature is then do send a photo to the newsdesk email and it will be forwarded to me. Over the Easter weekend there must have been plenty of people in their garden looking for nature as I received over 40 emails with photos and descriptions from as far afield as Cornwall. Do keep them coming, I enjoy the challenge. 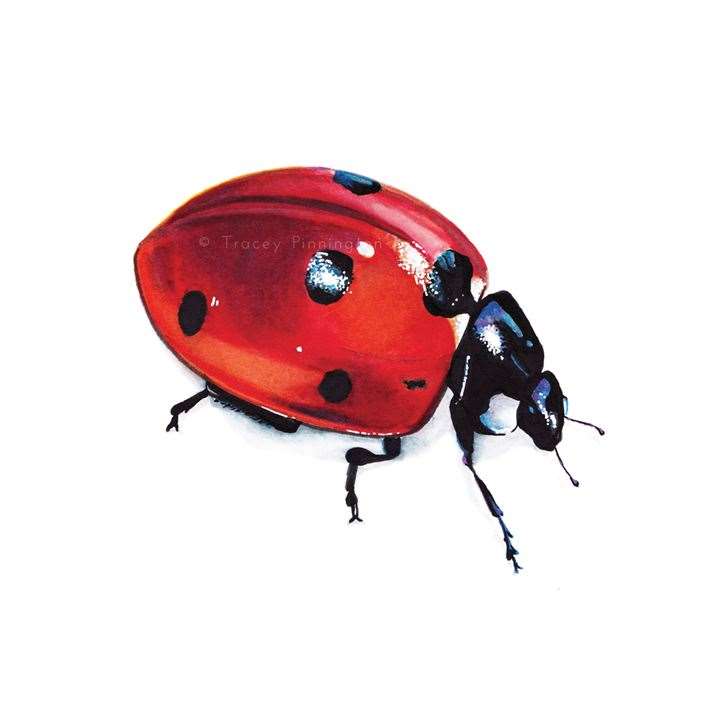